The Islamorada Fishing Clubs Captains Cup Sailfish Tournament kicks off on January 26th with fishing on January 27th. This is the final leg of the Gold Cup series and space is filling rapidly, so grab your fishing buddy and sign up today!

I hope everyone had a wonderful holiday season!!!

Now that season is here and with the Holidays behind us, we can all look forward to a Healthy, Happy and Prosperous New Year.

I would like to encourage all members to make your Dinner reservations at least 24 to 48 hours in advance. We will gratefully accept last minute reservations with time and space availability being considered.

The Staff and I would like to take this opportunity to thank the many members for their generous contributions Towards our Christmas Bonus Pool. Your generosity is always much appreciated. It has been our pleasure to have served you this
past year. 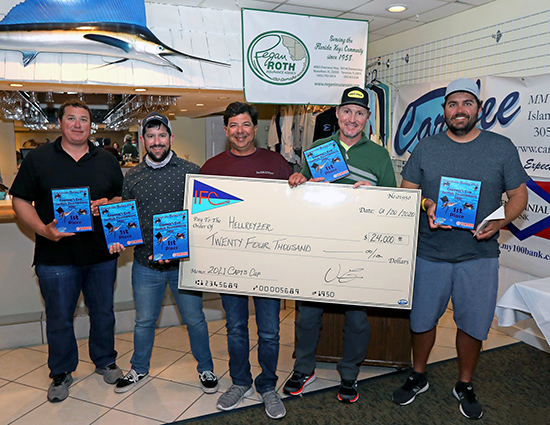 Although the State has moved into Phase 3, Monroe County still requires a face covering in all business’s upon entering, once you have been seated you may remove your mask. If you get up to use the restroom or converse with friends at another table, you must wear a mask.

Despite moving to phase 3, we will not be filling the club to capacity. We will also try our best to keep all table reservations at a safe distance We will not be restarting our Friday night happy Hour until further notice We are currently only serving lunch Thursday, Friday & Saturday . All these steps are in the best interest of all members and staff.

You are required to make a reservation to dine at the club. Please make reservations, preferably 24 – 48 hours in advance to secure a table at your requested time. Same day and last-minute reservations will take all guidelines into consideration. Please arrive on time for your reservation and know that in some cases we may have to re-seat your table to allow other members access for dinner.

Bar seating will be available only for cocktails prior to moving to your table, so long as it does not exceed your reservation time. We ask for all member’s cooperation as it applies to reservations and face coverings. All these steps are in the best interest of all members and staff. We will continue to do this for all our protection & so that we may continue to serve you throughout these unprecedented times.